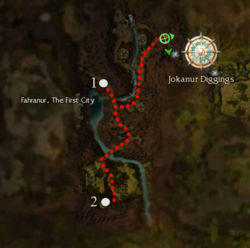 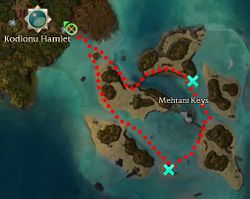 You need to rescue reindeer in two explorable areas (see the maps for their exact locations). In both cases, killing the Grentches and Humbugs that are near each reindeer group is enough to update the quest. You do not actually need to wait for them to catch up before talking to the Frost Maiden. The reindeer will neither help you in a fight nor will they get attacked.

If you do start from Jokanur Diggings, after rescuing the reindeer you can just run back to the Frost Maiden without having to escort the reindeer back to her (contrary to the objective description). Once you talk to her, the quest progresses.

The reindeer in Mehtani Keys are also easily reached. You can rescue both groups before returning to the Frost Maiden.

"Happy Wintersday. I wish I could say it was happy for me, but the reindeer I had been intending to offer as a gift to Dwayna for Wintersday were stolen! I turned my back for merely a minute while I prepared the reindeer a snack of oats and honey, and when I turned back...they were all gone! A Frost Maiden told me that she had seen my prized reindeer being led away by some Grentches and Humbugs and was going to try and follow them! I'm too old to go chasing after them...don't have the stamina for it. Please be brave <Player name>, find the Frost Maiden and ask her where my reindeer have gone!"

Accept: "Don't worry; I'll get your reindeer back."

Decline: "You brought reindeer as a gift? Wouldn't a fruitcake have been easier?"

Ask: "Have you found the Frost Maiden and my reindeer yet? It would be a tragedy if something happened to them."

"Did Grandfather Kringle send you? Oh thank the gods! Listen, the Grentches must have known we'd follow them; they split the reindeer into smaller groups so we would have a harder time catching them all. We'll need to find the reindeer that are in Fahranur before the other group gets too far away! I can't imagine the reindeer would let anyone take them too close to the ruins, so you can probably avoid looking there. Please hurry! I'd hate to think what he has in store for those poor reindeer!"

"You found them! Fantastic! The other group looked like they were heading toward Mehtani Keys the last I saw them. I'll take these reindeer back to Grandfather Kringle, and then meet you there!"

"Grandfather Kringle was extremely happy to get some of his reindeer back, but we're not done yet! A few people have said they saw the Grentches pass through here with the other reindeer, so they can't be too far away. We've got to find them before Grenth makes them into coats!"

"Oh this is wonderful...you found all of the reindeer! I'll take them to Grandfather Kringle right now, but you should go visit him yourself when you have some time. I've heard that he can be very generous to those who are nice to others, and I know he'll appreciate all you've done."

"[Character name]! The Frost Maiden told me how you saved my reindeer, and I owe you quite a lot it would seem! I doubt this will be the last that we see of those despicable Grentches and Humbugs, but it makes me feel good to know that people like you will still help an old man in need. Please take this as a small token of my gratitude."