How the Grentches Stole Wintersday 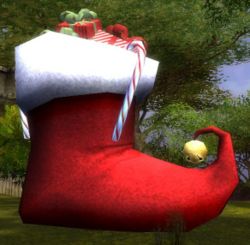 Start from Jokanur Diggings to rendezvous with the Grentch squad (three of them) waiting right outside. Following the quest marker, lead towards the southeastern corner of Fahranur to find the five groups of enemies guarding the Wintersday stocking. The giant stocking full of gifts cannot be interacted with. Each of the groups are spaced relatively far apart, but due to their relatively low level, a level 20 group will have no trouble taking on two or three groups at a time.

Alternatively, you can leave from Blacktide Den and kill all the enemies without having to meet up with the Grentches. This saves some walking, and allows a party of 8.

"There's no time to waste. I've been informed of the location of an enormous Wintersday stocking stuffed to the seams with a plethora of presents. These goodies are to be delivered on Wintersday to residents all over Istan. We cannot allow this travesty to happen! You must seek this stinking goodie sock and capture it for our cause. It will be guarded by servants of Dwayna, but you will not be alone in your mission. A squadron of Grentches await you in Fahranur. Join them and procure the presents in the name of Grenth."

Accept: "There's no better time for stealing presents than the...well...present."

Ask: "Go to Fahranur. The Grentches are waiting for you."

"Oh, this is exciting. We have struck a great blow against Dwayna with the success of this operation. There are great plans for these presents in the works. Twisted, maniacal, stinky plans. Hang around and you'll see something that will make everyone remember Grenth this Wintersday."