Find the Stolen Presents with the help of Rudi. 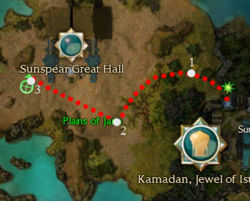 For both areas, simply head to the locations indicated on the map to find the Stolen Presents. As you near each area, your character will mention that Rudi's nose has started glowing. The unmarked presents do not show up even when using the ALT key, but the "Select nearest item" command works (use the F11 options to configure a key for it). The reason for this is they do not have a "title" (see bug note at end). On Issnur Isles, the presents are slightly easier to locate because you will find Grentches and Humbugs around them.

To complete this faster, start from the furthest present. This is done by taking advantage of the fact that you don't actually need Rudi's nose to find the Stolen Presents. You can still locate them and pick them up without talking to the Frost Maiden first. In this manner, starting from the Sunspear Great Hall and Kodlonu Hamlet (instead of Kamadan and Beknur Harbor) will save you time from having to backtrack to the Frost Maiden.

Grandfather Kringle
"You have good timing, <Character Name>. The Grentches have struck again! Apparently the reindeer kidnapping was just a distraction. While we were busy with the rescue, the Grentches snuck in and stole some of Dwayna's presents that were to be given away at the end of the festival! They took the presents through the Plains of Jarin, but they must have been in a hurry, because they were dropping gifts all over the place. That's how we found out what had happened. We were able to recover some of them, but we could use your help finding the rest. We need someone to search the Plains of Jarin and return whatever presents you happen to find. We have something that will help you find them, but we need someone to carry them back. What do you say, can you help?"

Accept: "Of course! We can't let those Grentches ruin Wintersday!"

Decline: "It's not my fault you guys can't keep track of anything."

Ask: "Have you recovered all the presents yet? The children will be so disappointed if there are no presents to open on Wintersday."

Frost Maiden
"I know this is going to sound crazy, but Grandfather Kringle and I think that Rudi here might be able to help you find the presents the Grentches dropped in their flight from Kamadan. You see, whenever this little reindeer here gets close to any sort of gift, he just lights up like a little lamp!"
"As you search the plains, pay attention to Rudi's nose. If it's glowing, you're close to one of the presents. Once you find all of them, bring them back to me. I'll make sure they are stored somewhere safe."
"<Character Name>, meet Rudi. Rudi, you remember <Character Name>, don't you? Go on now. Go help <Character Name> find the presents!"

When approaching the first present:

<Party Leader>: "Wow, his nose really does light up! There must be a package nearby!"

When approaching the second present:

When approaching the third present:

<Party Leader>: "There it goes again! Where's that present?"

After obtaining all three presents in Plains of Jarin:

<Party Leader>: "These presents are heavy! Let's take them back to the Frost Maiden."

Frost Maiden
"Good job, Rudi! Good boy! That's a good reindeer! You did a good job, too, <Character Name>! Thanks for bringing back these presents. We just received word from Beknur Harbor that the Grentches passed through there and looked to be on their way to Issnur Isles, and they were still dropping presents in their mad rush. We should go to Issnur Isles and get the rest of those packages back. Hmm...the Cliffs of Dohjok can be pretty tricky for Rudi to navigate. Tell you what, I'll take him and we'll meet you in Issnur Isles."

Frost Maiden
"Glad you made it. Rudi tried to knock me off the cliffs more times than I care to count, but we got here in one piece so that's all that matters."
"The Grentches are probably still hanging around, so be careful! Rudi will help you find the presents again, but don't let the Grentches get their hands on him! Just get rid of them and bring the packages back so we can return to the festival!"

<Party Leader>: "There's that glow again. Watch out for Grentches!"

After obtaining all three presents in Issnur Isles:

<Party Leader>: "These presents are even heavier.... What's in here, coal? Let's take them back to the Frost Maiden."

Frost Maiden
"Yay! Rudi's back, and so are the presents! Woohoo! You've saved Wintersday again! Thanks so much for you [sic] help! I'm sure once I take Rudi and the presents back to Grandfather Kringle he will want to thank you personally, so make sure to see him soon!"

Grandfather Kringle
"I had almost given up hope after the presents were stolen, but you saved the day, <Character Name>. Because of you, people will receive Dwayna's gifts just like she planned. And since you've been so helpful, I think you've more than earned this!"

Bug.Pressing CTRL-Space while having a present selected will produce the following dialog from your character: "I'm using a(n)." The present does not have a title in the target display at the top of the screen either.