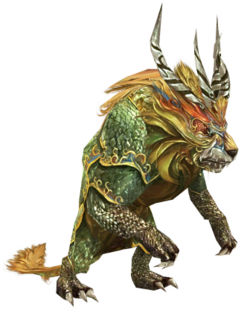 Put on your best red gear and prepare for a journey to Shing Jea Monastery, because it's time for the annual Canthan New Year's Festival. This year's beast of honor is the Celestial Ox, a divine celestial that will descend from the heavens to bestow good luck upon the populace for all of 2009—but only if the traditional New Year's feast is suitably delicious for such an illustrious guest.

In addition to the great feast, players can explore the Shing Jea Boardwalk, encounter colorful NPCs who offer a variety of festival-themed quests, and visit the wandering Fortune Teller for a glimpse of their future destinies. Anyone who likes a good game of chance will enjoy the return of the Rollerbeetle Races, and those who are feeling slightly more combative can visit the Dragon Arena all weekend long for some all-out dodgeball action.

Mark your calendars and help the Ox ring in the New Year, Canthan-style!

A feast, fireworks displays, dancing, fortunes, and a trip to the races...all this and more await you during the Canthan New Year's Festival. Here's what you can expect:

Several Chefs stand in Shing Jea Monastery. They will collect specific ingredients during the finale. For each ingredient turned in, you will receive a Lunar Token from that chef. If no dishes are prepared successfully, everyone in the district will be temporarily transformed by the Ox Form disguise.

Below is a chart describing the amount of items the player receives based on how many successful dishes were presented to the Celestial Ox:

1 If no successful dishes were created, players may be temporarily turned into Oxen.

In addition to the festival rewards, there is a special miniature available at this year's festival. Watch those Lunar Fortunes closely—your future just might include a Miniature Celestial Ox. 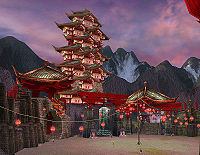