Truffles are a rare delicacy that's highly prized by chefs and collectors alike. 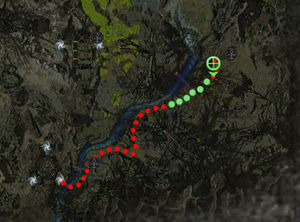 Enter from Brauer Academy. The southeastern quadrant of the area contains eight rapidly-patrolling groups, each consisting of one Dredge Gatherer and one Fungal Wallow, in addition to the boss Rot Foulbelly, who patrols with Nundak the Archer and two Dredge Guardians. The larger, stationary groups of Dredge can all be avoided except for the very first group you meet when following the route. Because the groups move fast and occasionally intersect with the larger stationary groups of Dredge and have various paths, it is advised not to simply chase them. Instead, walk around the later part of the route on the map above (in green). All patrols will at some point in their route cross this area. Use the higher ground from the hills here and a Longbow to easily pull them towards you. Do not fight the patrols too close to the stationary groups as these contain a Dredge Gardener, which will try to heal targets from the patrol and pull the entire group into the fight.

Bringing condition removal might be necessary as you will be affected by a lot of cripple from traps, poison and the incidental blind from the Dredge. The boss group is way harder to kill than the other patrols and only has 1 possible Truffle drop. Avoiding the group if you find it hard to kill is possible.

The run yields on average 3 Truffles.

See Talk:Truffle for another idea.