A piece of drake meat with skin still attached to it. 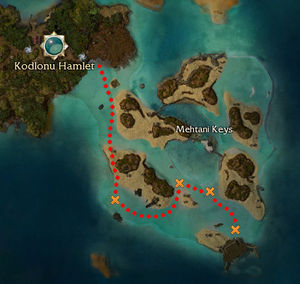 Start from Kodlonu Hamlet and hunt Irontooth Drakes in the 4 marked spots. You can usually avoid fighting other foes if you're careful. Near the second spot you'll find 2 groups of Corsairs; the eastern group will patrol far enough for you to slip by in most cases. At the last spot marked on the map, a group of Mandragors lies ready to pop up nearby so fight close to the shrine to avoid unwanted aggro. There are also two more groups of Drakes to the north of the last marked spot, beyond a few groups of Corsairs that can't be avoided (near Ajamduk, Hunter of the Sands), but for farming purposes these are less efficient to include. 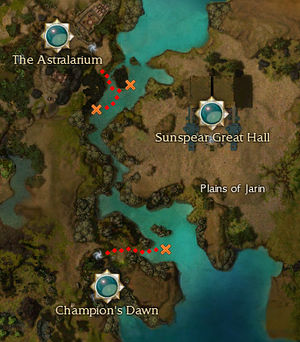 There are two Irontooth Drakes just east outside of Champion's Dawn (do not use AoE skills so you can avoid aggroing the nearby Juvenile Bladed Termites). Another two are outside the Astralarium. 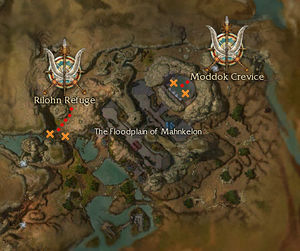 Farming Drake Flesh during Rilohn Refuge (mission) and in The Floodplain of Mahnkelon.

There are two groups of four Steelfang Drakes near the beginning of the mission. (Be careful not to trigger Dehjah; if she dies too soon, you will be kicked from the mission and might miss collecting your loot.)

There are about six drakes outside the Moddok Crevice door (in the water, just past the shrine). If you have Drakes on the Plain active, there will be two more groups just north east of the entrance to Rilohn Refuge.