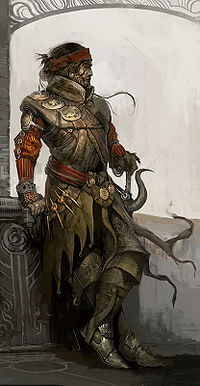 On land, Elona’s laws are defined and enforced by its three provincial governments. Life at sea is different. On every ship, a captain’s word is law, and many sailors follow their own personal codes of honor. Corsairs live outside the law, whether they’re standing on solid ground or the treacherous deck of a fast ship. As a matter of survival, each one recognizes the Code of the Corsairs, although many disagree on its particulars.

The most important concepts in the Code are loyalty to one’s captain (and the conditions under which you can justifiably mutiny), fair methods of distributing wealth (and the best times and places to steal it), and honorable ways of resolving differences (as well as the best ways to cheat in a duel). Land dwellers are often baffled by the inherent contradictions of this code. No matter how a sailor defines a personal code of honor, corsairs unite against their common enemies, setting aside all differences. The Code has kept the corsairs around for generations, passing on traditions, superstitions, and contradictions from one generation to the next.

The corsairs have remained free by learning to survive in treacherous waters, sailing where the Istani will not or cannot follow. Their fleets remain hidden near the most dangerous stretches of the Elonian coast. Between the northwest coast of Cantha and the southern rim of Elona, a deadly sea is troubled by sudden storms and cyclones, hidden reefs, and dangerous sea creatures. These waters were once navigated by fearless Luxon raiders from Cantha, and to this day, brigands from many cultures search for secret coves hidden by these deadly waters.

Other corsair enemies include: