Halloween comes to the world of Guild Wars every year, on October 31st. Certain towns were decorated with deadly decorations and ghastly scenery. 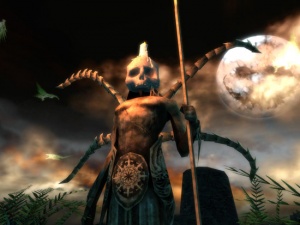 Statue in Kamadan redecorated for the event 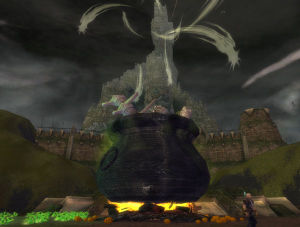 This is from the game update that made changes for the event:

Beginning of the Halloween Event[edit]

When the moon shines down on the Elon
Like the eye of a ravenous drake
Keep a lantern close by and the darkness at bay
For on this holiday night, they say
A spirit returns, pumpkin on head
Wicked deeds (and bad jokes) will abound
He’ll bluster and shout
Spread chaos about
’till a banishment for his mischief be found
Heed my tale, ye brave heroes
From lands north and south
Listen wherefore I say:
Bind your sanity close, lest you lose what you love most
When the monarch of madness appears.

Now sadly, the madness is ended
Laughs abounded and no tears were shed
King Thorn has returned to the Underworld
Pumpkin still very much on his head.
No more scares for Elona and Tyria
No more transformations or spooky décor
Peace comes at last, though we can’t help but ask:
Will the Mad King return once more?!

From the Guildwars.com Halloween 2006 event page[edit]

When sunlight wanes to shadow
And mists fill nights once clear
'Tis time to think of monarchs
Who visit once a year.

Hail, Thorn, the king demented,
Whose laughter fills the air
Where cunning gifts are given
With wit and deadly flair!

And as the season passes
Remember what you've seen
In Lion's Arch and Kamadan
On this good Halloween.

Participation in one of Mad King Thorn's appearances will earn you a festival hat:

Tyrian collectors for Halloween were found in the same outposts they were the previous year, with the exception of Droknar's Forge. The Elonian province of Istan also had Halloween collectors arrive for the festival.