A Celestial Essence is all that remains of a fallen celestial. 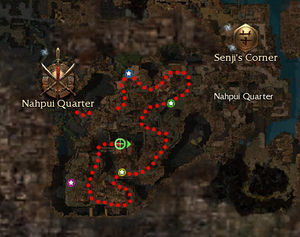 In order for them to spawn, you must first eliminate their respective bosses. Killing Kaijun Don, the Kirin celestial, will cause Essences of Kirin to spawn, and so on. Bear in mind that, after a short period of time, essences will respawn upon returning to their original locations. These, in turn, will not drop loot, which makes backtracking less attractive for farming.

Proceed with the mission as normal, leaving the last boss alive to prevent completion. It is recommended to start with the left-most portal and leaving Hai Jii alive as Essences of Phoenix will consistently interrupt your skills. When fighting Kuonghsang or Essence of Turtle, consider moving out of aggro range to prevent being the target of Grenth's Balance once they are low on health. Consider also venturing outside the path shown to eliminate additional groups of Celestials.

One method is to bring a solo farming build and a party of henchmen and/or heroes. Have them help kill all the Tengu, but avoid killing any of the bosses. Once the map is cleared of Tengu, flag your party away and solo farm the Celestials. Essences of Phoenix can be solo farmed by a spirit spammer, since they rely on hex spells to deal damage and spirits cannot be hexed. Essences of Dragon and Essences of Turtle can be solo farmed using spell targeting prevention skills, since they only use spells.