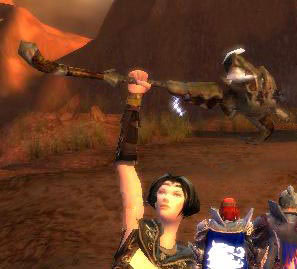 The fame stick as seen in a BWE

The fame stick was an item given to beta players that achieved at least rank 3 in the Worldwide tournament Tomb of the Primeval Kings. Unlike regular weapons that normally do not appear when a character is in a town or outpost, the fame stick was equipped on the rank 3 or higher character inside the Tombs outpost so that it could be used to impress other players.

Also, the more fame or higher rank the character had, the larger the fame stick was given to that character.

Fame sticks were phased out of the game and replaced with /rank emotes. ArenaNet spokeswoman, Gaile Gray, has stated that fame sticks will not be returning to Guild Wars but may be a possibility for Guild Wars 2.