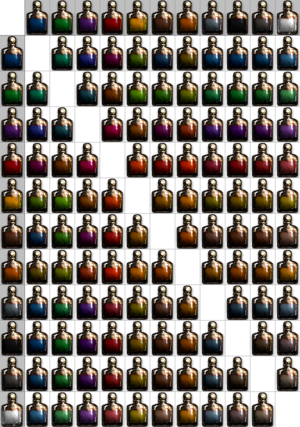 Prior to the October 25, 2006 game update, there was no Dye Preview panel. To mix colors, one directly mixed one dye with another by double-clicking on one and using it on the other. The result was the replacement of both vials by a single new vial, called Mixed Dye. As such, Mixed Dye has no set color but can be any variable; see the picture of the table below.

The total mix could be made of up to four vials, the same as is possible via the current Dye Preview panel. This combination could be done in any order (two mixed dyes on each other or two individual dyes on a mixed dye, for example).

The icon of Mixed Dye was variable: a vial of dye with special coloring according to the vials used (for example, one made of blue and green dyes would be teal). If the now extinct Dye Remover was included in the mix, it was a specially colored icon of the Dye Remover instead.