The Ahmtur Arena - probably named after Prince Ahmtur the Mighty - is an arena that was cut from the retail version of the game. Battles in the arena were 4v4 King of the Hill matches. The arena has an Egyptian-style pyramid or altar in the middle. With the January 11, 2007 update, which prepared the servers for alpha testing for Guild Wars: Eye of the North, a bug was introduced that made this arena accessible from Random Arenas, loaded as "Random Arenas Test".

There is no current way of accessing the arena, as it is blocked off by rocks. 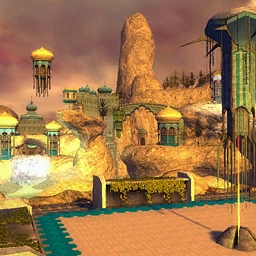