The Guild Wars In-Game Store (formerly called "The Guild Wars Official Store"), introduced in the July 28, 2006 update, was an Internet store for ArenaNet's Guild Wars related products, accessible by the client itself, from the character selection screen. It offered additional campaigns, character slots and other upgrades. All purchased goods were automatically added to the account that had been used to log into the store, so there is no physical shipping at all. There were several methods of payment including credit or debit card. The Guild Wars In-Game Store was removed in the June 26, 2014 update and clicking the "Enter Store" button minimized the game client and opened the Guild Wars page on the NCSOFT Store. After the June 27, 2014 update, it was changed to open the Guild Wars Online Store, which is the Guild Wars page on the NCSOFT Store relocated to the official Guild Wars website.

The following items used to be for sale in the store, but became unavailable: 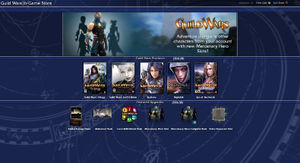 The main page of the store