The Imperial Dragon Mask is a festival hat obtained during the Dragon Festival 2009 finale held in Shing Jea Monastery. Emperor Kisu arrived every two hours, rewarding a Imperial Dragon Mask in exchange for 250 Victory Tokens taken from the player's inventory. For the week following the end of the event, the mask could also be obtained by exchanging 250 Victory Tokens with Imperial Supply Master Kagno. Since 2012, it can also be obtained by exchanging one Imperial Mask Token with Imperial Supply Master Kagno during the Dragon Festival. 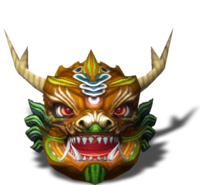 Dye affects the "skin" area of the mask. The default color can be closely replicated using yellow dye (see Notes).

Bug.Has a slight clipping issue with Ancient Armor for the Assassin.

Bug.Has a rather drastic clipping issue with the coat of Norn Armor for the male Mesmer.

Bug.In all others languages, the mask is always named its English translation.
Retrieved from "https://wiki.guildwars.com/index.php?title=Imperial_Dragon_Mask&oldid=2572239"
Categories:
Hidden category: