This article is about a mission. This name is also used for an outpost.

Warning: Key elements of this mission-related article are incomplete. You can help the Guild Wars Wiki by expanding it according to the formatting guide.

Scarred Psyche is a challenge mission during Halloween. 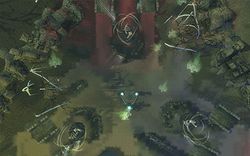 This mission rewards Trick-or-Treat Bags, Gold and Gamer Points based on the formula below. Values are rounded down. Additional bonuses are awarded for beating the daily best, monthly best, or quarterly best scores.

During this mission, you're under the disguise of Candy Corn Infantry and have 600 Health, 50 Energy and the following skills:

The main goal is to kill five of Joko's generals to force Joko to come out and fight, who you must then defeat. There are twelve bosses in the map at first; six generals and six priests. Each general will be accompanied by a priest and six guard NPCs. The priests do not need to be killed nor does the last general. Once you kill five generals, Palawa Joko will spawn at the location of the sixth general - bringing his health down to about 25% will complete the mission.

When entering the mission, leave the starting area through any of the three doors. Defeat the first wave then continue to either side and kill the two generals (which generals you kill first doesn't matter) - ignore the priest and the guards if possible, as you can save time by simply breaking aggro. When both generals down that path are dead, return to the center, kill off any foes, then go down another path and kill the two generals, once more returning to kill any foes in the center before going down the third path. After killing the fifth general, quickly return to Thorn as he and his group will head towards you and can become body-blocked and unresponsive by spawns (who may have a chance to kill Thorn because of this). Once Thorn is with you, head to where the sixth general is and focus fire on Joko - killing the last general isn't necessary.

If you don't defeat Joko within 30 minutes
Mad King Thorn: "I warned you to do this quickly; now you will suffer for your lethargy!"
Palawa Joko: "Leaving so soon, pie for brains!?"
Mad King Thorn: "I'll be back! And next time, I'll choose my pawns more carefully!"

Randomly after first four generals' death
Mad King Thorn: "I say, you are a glutton for punishment. Each time you come back you get monumentally defeated by dis person, dat person, some Ossa person..."
Palawa Joko: "Why don't you just quit now, go home, and play with your stupid invisible pony?"
Mad King Thorn: "NO ONE INSULTS MISTER GUM DROPS!"

Mad King Thorn: "Another one bites the dust... again!"
Palawa Joko: "I'm going to use your head as a chamber pot! Only then would it be filled with something of substance!"

Mad King Thorn: "What a very splendid hat you have there, Palawa."
Mad King Thorn: "It must do an excellent job of keeping the vultures from landing on your head. HA HA HA!"
Palawa Joko: "I'm going to wipe that smile off your...pumpkin, Thorn!"

Mad King Thorn: "A Dwarf, a Norn, and a Charr walk into a bar..."
Mad King Thorn: "And they didn't invite you, Palawa, because YOU HAVE NO FRIENDS! HA HA!"
Palawa Joko: "Laugh all you want, pumpkin man, but you're about to get GORED!"

Palawa Joko: "You pathetic pile of flesh and bones, you can't even hold yourself together!"
Mad King Thorn: "Ha! Your soldiers are as hopeless as your insults! Ready to surrender?"
Palawa Joko: "Never!"

Mad King Thorn: "You're starting to look a little frayed, Joko."
Mad King Thorn: "Should I call you a tailor or just fetch you a roll of toilet paper?"
Palawa Joko: "We're not so different, you and I: we're undead, we're both kings, we command huge armies, we both freely walk the world every day of the year..."
Palawa Joko: "OH WAIT!"

Mad King Thorn: "Palawa, you certainly are making this difficult on me..."
Mad King Thorn: "I'm trying to come up with a joke, but none of them are as funny as YOUR FACE!"

After Joko's defeat
Palawa Joko: "Curse you, Thorn! I'm going to..."
Mad King Thorn: "Yes, yes. Flood valleys, enslave nations. I've heard all of it before. I'd like to see you try!"
Palawa Joko: "You'll see! You'll rue the day! Go on, start ruing!"
Palawa Joko: "This is not the end of Palawa Joko!"

Anomaly.When Thorn and Joko speak, a face will not appear in the dialogue box, even if they are within radar distance.