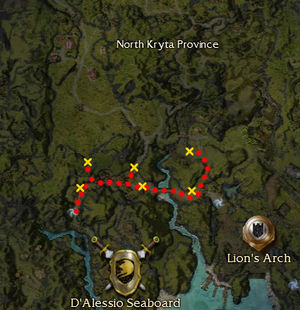 Start from either D'Alessio Seaboard or Lion's Arch. There are several groups of either 2 or 3 Imps roughly at the crossmarks on the map but they tend to move around a bit. You can avoid most other enemies although there is often a single Bog Skale spawning with the group closest to the Lion's Arch exit and a group of 3 Caromi that only spawns occasionally near the bridge. The run can be started from either portal, finishing close to the other portal. It may thus be more time efficient to walk into the portal and back out if you need to do another run, instead of Mapping. 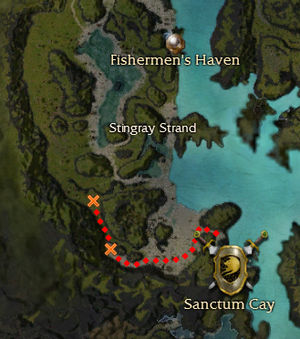 Start from Sanctum Cay and proceed north by hugging the left wall until you reach the vast empty grass area prior to the groups of Caromi. There are several groups of Inferno Imps and only an initial group of Lightning Drakes.