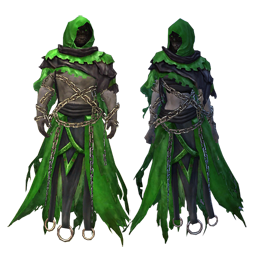 When your characters don the phantasmagoric Vale Wraith Costume, they'll embody the very spirit of Halloween! This item fits into the costume slot on your character panel and can be worn over existing armor.

The Vale Wraith is a Halloween costume. The set comprises a Wraith Veil and a Wraith Shroud.