Raiment of the Lich 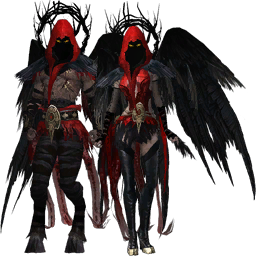 Strike terror wherever you go when you dress your characters in this sinister Raiment of the Lich costume. With the hood up, the darkest of haloes will hang over your head. Strip back your cowl, and you'll reveal a familiar face that's been horribly changed. While it may not come with your own Scepter of Orr, your cloven feet and ebony wings will surely command respect among the legions of the undead!

Dye affects the areas that are red by default, including the chest piece, and the trailing ribbons behind the character. The areas that are black or gray by default are not affected. The Aspect of the Lich is dyeable, but doing so has no noticeable effect.

The profession of the character wearing this costume appears to affect the condition of the wings. 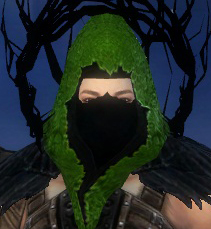 Head poking through the Cowl of the Lich.

Anomaly. While a character is wearing this costume, its appearance in the character selection screen may or may not reflect this.

Anomaly. While wearing the costume, the footprints' impression left is still that of a boot, not the hoof-marks that would be expected.

Bug. When wearing Cowl of the Lich, the top of character's head can sometimes be seen poking through on the character selection screen and inventory screen.