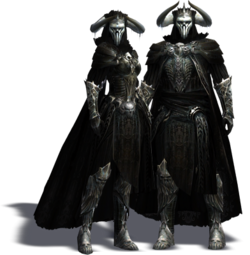 This imposing Grenth costume represents the rarely-seen, fashionable side of the Tyrian god of death. Deck out your character in regal morbidity with this costume and matching headpiece, and spread a little darkness this Wintersday!

Grenth Costume is a costume fashioned after Grenth, the god of death and ice. The set comprises of a Grenth's Visage and Grenth's Regalia.

Dye affects the hooded area of the visage and the first layer of the regalia. The metallic areas and the cape are unaffected. The default color is gray.

Bug.When walking, the boots will display clipping through the cape.

Bug.The sides of the cape disappear when the point of view is zoomed out.

Bug.When viewing a character on the character selection screen, the diadem will not appear and the regalia will be a different color to how it appears in-game