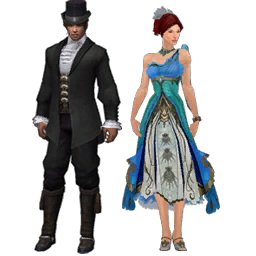 Celebrate the union of Gwen and Keiran with our all-new wedding costumes! Wear an exact replica of Gwen’s strapless wedding gown and Keiran’s tuxedo with the Wedding Couple Attire. Don an elegant formal gown or a dapper tuxedo with the Formal Attire, or dress up in a male or female tux with the Dapper Tuxedo. If you really want to celebrate, pick up all the costumes in the Wedding Party Costume Pack. Each elegant costume comes with a male and female version, and can be worn over your existing armor without affecting your stats. Buy these special decorative garments in the Guild Wars In-Game Store and the NCsoft Store today!

The Formal Attire is a Hearts of the North costume. The set consists of a Formal Headwear and Formal Outfit.

Dye affects the hair of the Formal Headwear, the main dress of the female outift and the overcoat and pants of the male outfit. For the female set, the hair tie on the headpiece and the white under layer of the outfit are not affected. The default color is black.

Bug.The male version of this costume is heavily affected by the "white snow" displaying issue in the form of blinking white dots appearing around outfit's edges if the Anti-Aliasing option is enabled within the game's graphical settings. Female version is also under the similar flaw's impact, yet to a slighter degree.

Bug.Female version has clipping issues; while running and during most emotes that use the legs (/dance, etc.).