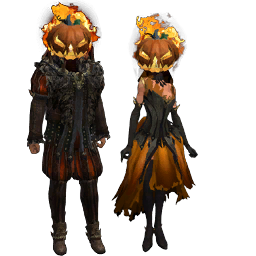 Join Mad King Thorn as a member of his Lunatic Court! You’ll fit right in among the Mad King’s inner circle when you outfit your character in this festive Lunatic Court Finery costume. If the flame about your helm is too hot, you can always take it off, but be careful you don't lose your head at the sight underneath. It's the perfect thing to wear to this year's spookiest celebration!

Dye affects the areas that are red by default, including the lower sections of the Finery, as well as a slight portion near the armbands of the Finery. The areas that are gray by default are not dyeable. The Lunatic Court Helm is dyeable, but doing so has no noticeable effect. Note that dye has the same effect on a headless finery as it does on a regular one.

Anomaly.While a character is wearing this costume, its appearance in the character selection screen may or may not reflect this.

Bug.If you equip the Lunatic Court Helm while in a disguise or form, the fire effect is shown around the head of the disguise/form.

Bug.If there are too many people in a town, such as on a special event, then the fire from the Lunatic Court Helm will stop animating for everyone in the beginning districts of that town.

Bug.If you wear the Headless Lunatic Court Finery while wearing the helm, the helm will disappear while the flames remain visible. Both flames and helm will be invisible on a mercenary, however.