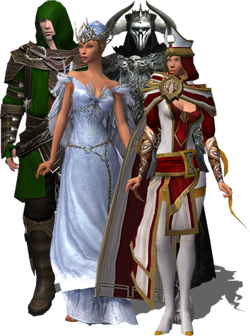 Costumes are decorative items that are equipped into a character's costume slots to change their appearance. They are worn over a character's existing armor, and do not affect any stats.

The costume slots as they appear in the Inventory window.

Costume slots are located in your Inventory window, under the cape and weapon slots, making it possible to wear a festival hat and/or a costume, at the same time with your armor. Festive hats in your inventory prior to the December 17th, 2009 update will still replace your headgear, and not make use of the Costume Headpiece slot. Costume slots can only hold a costume, and/or a festival hat.

All costumes share the same general properties, most notably that they are purely cosmetic: even though they have the appearance of armor, they will never offer any in-game advantages: 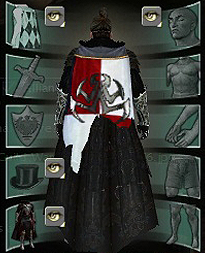 Bug.Some characters may have "see through" parts during some animations.

Bug.If both the costume and cape are set to "Always Show", they will both appear in the Inventory window, causing an evident clipping issue; however, this will never be visible to other players.