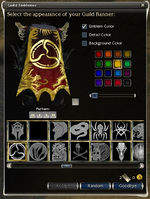 Capes are acquired by joining a guild that has one, or buying one from the Guild Emblemer as a guild leader, which costs 2

. Capes bear the symbol of a guild, and is a requirement to buy a guild hall. Only guild leaders can change the cape of a guild, but every member has the ability to preview a cape design on the Guild Emblemer pane.

The guild cape is worn on all characters of an account, regardless of member status. Much like a character's headgear, visibility can be set to only in towns, only in combat areas, both, or not at all (via the Inventory screen). Capes are required to be shown in PvP combat and is displayed automatically (regardless of preferences set in the inventory menu). The cape's color scheme alters in PvP depending on the team color - blue, red or yellow - but the emblem remains unchanged. Players joining PvP battles without being in a guild will temporarily don a blank cape without an emblem for every battle. This kind of cape doesn't appear nor remain in the inventory and disappears after the battle ends, or when the battle is left.

Gold, Silver and Bronze cape trims are awarded to guilds that place well in worldwide Guild Battle (GvG) tournaments. Four special championships, as well as monthly generic ones have occurred:

These cape trims used to be awarded to top finishing guilds at the end of each ladder season.