Warning: Key elements of this item-related article are incomplete. You can help the Guild Wars Wiki by expanding it according to our formatting guide. 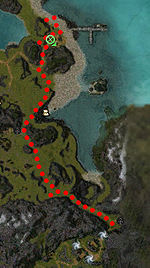