This piratical cult is a menace to all free people in Cantha and presents a constant danger on the roads cutting through the continent’s less-populated rural areas. Crimson Skull forays into civilized Cantha have become more regular and murderous in the last 200 years. Entire settlements have been slaughtered by these outlaws. Death serves the Crimson Skull two-fold: as something to worship, and a way to get very, very rich. Within their number the Crimson Skull count trained Ritualists, Elementalists, and Rangers, among others.

The Crimson Skull is a gang of pirates and thieves that terrorize Shing Jea Island and the surrounding waters. They are lead by Captain Quimang, a former student of Master Togo. They have taken control of Port Kaimu and Hanzing Pier. Their main base is located just south of Port Kaimu.

They have been seen besieging villages such as Tsumei Village, demanding protection money from farmers, and working as hired bodyguards.

Captain Quimang, along with his remaining men, were killed off by order of The Emperor's Blade following an attempt at reasoning with Quimang, during Quimang's Last Stand. The guild survived Quimang's death; however, their activity was reduced over the next seven years, including the abandonment of at least one camp, and it is unknown who replaced him. Lieutenant Kao Li indicates that despite this, the Crimson Skull guild is still alive and well. 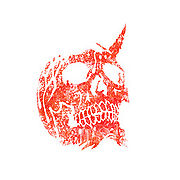