Dessicated Hydra Claws are trophies dropped by Hydra in the Crystal Desert.

Hydra have a particularly strong presence in Skyward Reach. As per their nature, abilities that prevent knock downs and provide fire or elemental damage resistance are particularly useful against them. 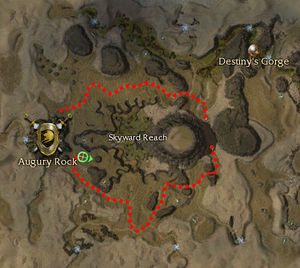 Start from Augury Rock and head eastwards along the northern path until you reach the teleporter. Activate it and continue clearing the area in a clockwise fashion, eventually making your way back to Augury Rock.

You will encounter mostly Hydras, commonly in groups of two to three, with the occasional group of four. Some groups may patrol outside the path shown, but can still be found within compass range.