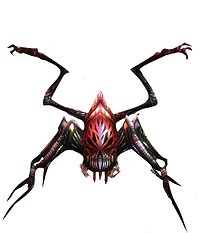 Dryders are spider-like creatures that can be found throughout Tyria and the Mists.

They are almost exclusively offensive spellcasters, mostly encountered as hex-based necromancers throughout Tyria, and more frequently as elementalists and mesmers in The Mists, where they usually serve Dhuum.

They also seem to feed on souls as they are frequently seen next to dead bodies or souls, and their skills (Soul Leech, Soul Torture) further references that.

According to Nicholas the Traveler, Frostfire Dryders have poisonous fangs, however none of the Dryders in the game can actually inflict poison.

Anomaly.Dryders wield a staff in their right hand, but they use their left hand to attack.