This article is about an explorable area. This name is also used for a mission, an outpost, a Zaishen mission quest, and a Zaishen vanquish quest.

The Arborstone area is wherein lies Cathedral zu Heltzer, the place where the sacred Kurzick relic, the Urn of Saint Viktor, is stored. After the Arborstone mission, the cathedral is now overrun by Wardens. In the watery lowlands surrounding the cathedral itself are groups of Dredge, Kirins, and hostile Plants.

The Count's Daughter primary quest will lead a party through here for the first time, although that part of this explorable area is actually in an isolated small section. To explore the rest of this explorable area will entail reaching the Altrumm Ruins first. From there, secondary quests like Song and Stone and Wardens On the March will bring parties here. From Arborstone, talk to Gatekeeper Becker. This will allow you to enter the northern part of the explorable area (with Lift Operator Shulz). 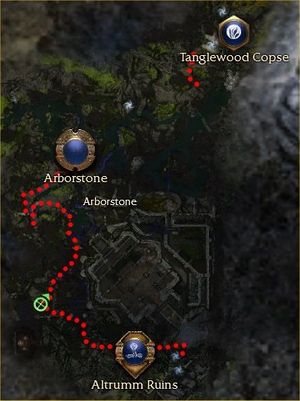 Route to Altrumm Ruins and the Arborstone outpost via death outside Tanglewood Copse while controlled by the Kurzicks. 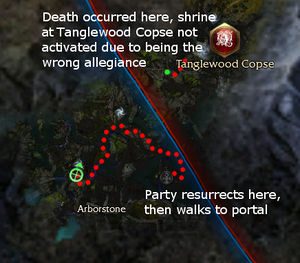 Route to the Arborstone outpost via death outside Tanglewood Copse while controlled by the Luxons.

Bug. Kneeling at the statue of Balthazar resurrection shrine at the exit into Altrumm Ruins will sometimes not cause the Champion of Balthazar to appear.

Bug. If you reconnect after disconnect, any dead elemental will respawn. They will have to be killed again to count for a vanquish.