This article is about the human gods. For other deities, see Religions of Tyria. For the old gods from the canceled Utopia campaign, see Old Gods (Utopia). 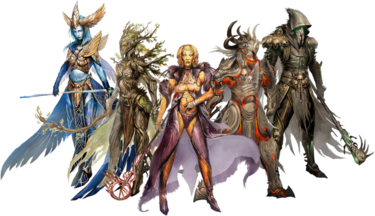 Dervish forms of the Human Gods of Tyria: Dwayna, Melandru, Lyssa, Balthazar, and Grenth (respectively from left to right). (Kormir and Abaddon do not have a form named after them.)

The Human Gods of Tyria are the most commonly worshiped pantheon of gods in Tyria. They are the beings who, in the religion of humans and other advanced races, are credited with the creation of the world of Tyria, providing knowledge and magic to the races, and bestowing the Favor of the Gods. One of their titles, the Old Gods, is given because they have left the world of Tyria during the Exodus of the Gods at year 0. In the timeline BE stands for Before Exodus and AE stands for After Exodus.

The current pantheon of human gods are:

According to legend, the gods used to live on Tyria while they were creating it - however it is now known that while the gods used to live on Tyria, they did not create the world but simply brought humanity to Tyria at an unknown time in the past. Three of the True Gods - Balthazar, Dwayna, and Melandru - used to make their home the city of Arah in the area known as Orr. Abaddon might have also lived in Arah, this is unknown due to all knowledge of him being erased.

In the year 1 BE, Abaddon gifted all sentient races with the gift of magic, but it was abused by all as each race tried to use this gift to destroy the others. After a plea from King Doric, the gods sealed most of the magic away in the bloodstones in order to reduce the amount of magic used, and thus reduce the damage done. Abaddon, who opposed the reduction of magic, attempted to lead a war against the other gods and was imprisoned in the Realm of Torment following his defeat. The other five gods then left Tyria for good and went into the Mists in an event known as the Exodus of the Gods.

Since the Exodus, the Gods have not directly intervened with any affairs in Tyria, although they still watch the world and grant it Favor of the Gods.

Recently, it has been discovered that some of the realms of the gods are under attack. Dhuum's demonic army is assaulting the Underworld in hopes of freeing the former God of Death from imprisonment in the Hall of Judgment. Menzies is assaulting the Fissure of Woe with his Shadow Army to obtain his half brother's throne. There have also been attacks on The Hall of Heroes path leading from the Tomb of the Primeval Kings and the Dragon Festival in Cantha was attacked before the events of Nightfall.

Yearly, Grenth and Dwayna have a "battle" to gain favor from the races of Tyria in order to determine if winter should last longer, or if spring should come sooner. It appears that only humans, dwarves, and norn celebrate this occasion. The norn are likely only involved for the party, as the change of seasons has little to no effect on their land.

The presence of the True Gods can be felt in the present day when the world has earned the Favor of the Gods.