So, since a lot of undead boss names are arabic, Vizier Khilbron talks with an arabic accent and the clothes of the undead indeed look a bit arabic, could we say that Orr was a Egyptian or other middle-east style land before it did boom? -- Magamdy 13:55, 6 December 2009 (UTC)

Why not, but since it's not official, can't really put it in trivia. Suppose we just gotta wait for more information about GW2 and Orr. Mediggo 14:14, 6 December 2009 (UTC)

Oh and i got my hands on these 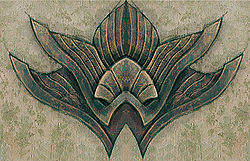 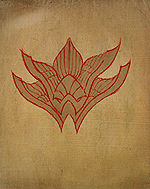 Huh ... For some reason I always thought the Cataclysm happened a hundred years or so before the Searing. :S
And considering it continues on to the coast of Elona, I wouldn't put it past the place to have had some kind of Egyptian theme. – NuclearDuckie 09:56, 3 September 2010 (UTC)

there is a ship docked in the LA Bay with the orrain symbols on its sails anyone know the reason?--User:Ickoization 01:22, 30 March 2011 (UTC)

→ moved from User_talk:Tennessee_Ernie_Ford#Orr and light

Considering that Orr was the home of the gods (gods often being put on par to beings of great 'light' - even moreso with gw2:Malchor s story), Hebrew is of the same locational origin as Arabic (Middle East), Zhaitan is from Shaitan which is Islam and not Arabic, and was destroyed in the pillar of light (and fire), I'd say the Hebrew meaning of Orr is at least semi-relevant, moreso than Hungarian. Konig/talk 16:21, 5 July 2011 (UTC)

Gods = light is a stretch because there's nothing in the GW lore about Orr that says that these gods were beings of great light (arguably, there's semantic confusion in English when translating various ancient terms, but that's another story). "Norr" (not "Orr") is the Arabic equivalent. Hebrew = Arabic is less of a stretch, so the closest we really have is: names are Semitic in origin, Orr means light in a Semitic language, other cultures in history have equated gods with beings of light. I don't think that meets our admittedly vague standards for Trivia. — Tennessee Ernie Ford (TEF) 16:30, 5 July 2011 (UTC)

I never said Gods=light, but "on par to beings of great 'light'". That is, in most fiction, they are shown as radiant beings, and this is true for the GW gods as well. Apparently you never read the link. I also never said that "Hebrew=Arabic" - I said that they are in the "same locational origin" - that is, Hebrew and Arabic originated in the same world region (the Middle East). Considering other Orr-related things hold Middle Eastern origin (Islamic), that puts Hebrew to be even more relevant. Konig/talk 16:39, 5 July 2011 (UTC)

I'm saying it requires several semantic stretches to link the use of Orr in GW with the Hebrew word for light. What happens in most fiction is not a standard we have used in the past. Conventions in GW2 aren't useful as a standard for determining what's relevant in GW1 (given that these names were created years before GW2 was a twinkle in anyone's eye). — Tennessee Ernie Ford (TEF) 17:11, 5 July 2011 (UTC)

I should clarify a point: Whether there's a direct link to the meaning of the term is less relevant than there being a link between the subject of the article (Orr) and the origin of the trivia (in this case: Hebrew). If there was an Arabic word "Orr" then I'd say that's more relevant. Point being: Hebrew is arguably relevant, Hungarian is not. Even if Orr was Hebrew for "doo-doo head" I'd argue that it's relevant trivia due to the naming consistencies found in Orrian culture and things related to Orr - everything has an Arabic/Islamic/Hebrew (aka Middle Eastern) sound, origin, or mirroring meaning.
Gods often being radiant beings is just a bonus. Konig/talk 17:51, 5 July 2011 (UTC)

Everything else in-game (related to this) has an Arabic origin; nothing else has a non-Arabic origin. (Shaitan is an Arabic word used in the Koran to refer to any of the beings that rebelled against God, notably translated into English as Satan.) If the name of the culture was Norr, I'd think we'd have a definitive reference.

For now, it smells to me like coincidence: there are oodles of sounds/phonemes in English with a corresponding transliteration to a Hebrew or Arabic word. (Rock sounds like the Hebrew word for only, but I wouldn't argue that any rocks have any special place in Orr.)

Norr is also a possible reference, since you bring it up so often (that is, Orr is Norr without the N). Your example for rocks confuses me, as I see no connection between "Rocks" and "Orr." Konig/talk 18:32, 5 July 2011 (UTC)