This article is about the explorable area. For the outpost that gives access to this area, see Zaishen Menagerie (outpost).

In a beautiful, lush new explorable area in the Battle Isles, the Zaishen Order runs a tight business breeding and training all the common and prestige pets from around the world for their clientele. There are a few ways you can start your own collection in the Menagerie. Bring any pet with you or your Heroes to the Tamer in the Menagerie Grounds. The Tamer will check your pet's evolution and unlock that tier and any lower tiers. Adding charmed pets to the Menagerie is absolutely free. You can also use Balthazar Faction or pay with Zaishen Coins and gold to have the Zaishen Order unlock and train evolutions of pets for you. This way, you've got several choices for unlocking all your pets.

The Zaishen Menagerie Grounds is an explorable area where the Zaishen Order takes care of the charmable animals you have unlocked on your account. Charmable animals can be brought in from the wild, or purchased here and trained for you by the Order.

There are various climates in this one area that create the appropriate habitats for the charmable animals.

Go to the Zaishen Menagerie and talk to Gate Guard Hirvela for access.

The Zaishen Menagerie is account based, which means that any charmable animal you unlock will be available to all characters on that account, both PvE and PvP. You cannot, however, bring other players into your own menagerie, it is only for yourself and your heroes.

If you speak to Emryd the Tamer with an animal companion (pet) in your party, she will unlock yours or your hero's current pet at its current level and evolution tier and all lower tiers for that charmable animal. Similar to other pet tamers, she is able to take the current pet and release it, allowing you or your hero to charm another animal as a pet. Provided you have a Moss Spider Egg, Emryd can take it and unlock the Moss Spider.

You can search the grounds and find an unlocked charmable animal at tier 1 and charm it. 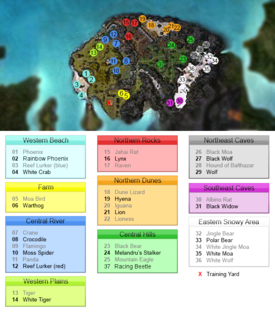 Locations of all the charmable animals in the Menagerie.

There are 7 tiers, with a level 20 evolved (non-elder) charmable animal being the highest tier.

Anomaly.On the grounds, when level 5 charmable animals are attacked, they become hostile. However, (1) they do not attack the party and (2) sometimes, the other members of their species also turn hostile.