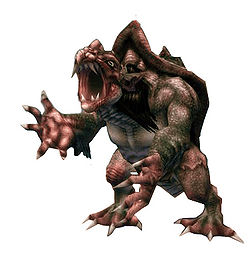 The Kappa are savage turtle-like creatures that carry their eggs on their shell.

Kappa tend to live in large groups near water both flowing and petrified, so they are found in prodigious numbers in such varied locales as Shing Jea Island, the Jade Sea and even in the dank sewers of Kaineng City. Befitting their habitat, Kappas are near exclusively Water Elementalists. The Kappa of the Jade Sea are said to be servants of Zhu Hanuku.

Except in Guild Wars Beyond, all Kappa are referred to simply as "Kappa". However, Kappa vary strikingly based on location and level in their visual appearance, skills used, and drops. It can be assumed that Kappa gain strength as they age, based on the trophies dropped by the different variants. Therefore, it's often easiest to differentiate varieties of kappa by their respective trophy.