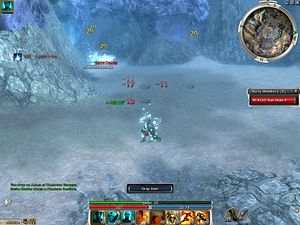 Rubber-banding or warping are colloquial terms referring to de-synchronization between the client program and the Guild Wars servers. It typically occurs when trying to control a character via keyboard movement through narrow pathways, usually filled with other players or obstructions. The client thinks the character is moving, while the server knows in reality it's stuck. The end result is that the character will eventually "sling-back" to the location where it got stuck, just as a rubber-band slings back to its resting state when released.