This is probably the intention "The gift will be a special Demon Mask, crafted to commemorate the victory of Cantha over the demonic hordes at last year's festival." poke | talk 12:24, 4 July 2007 (UTC)

I think the demon mask comes from the portals in Realm of torment: 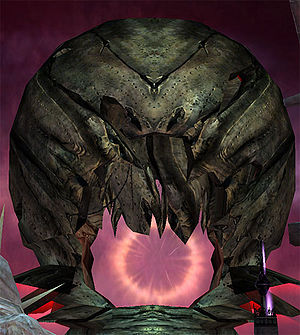 Yeah I agree it does look like an oni, =] its hard to tell from the official picture what it properly looks like, but it reminds me of a Tengu Mask. its the bit that comes down in the middle that looks similar. ^^ --Alien

Recently (I just now got one) started dropping from creatures. :) - BeX

the dragon mask last year were so much more awesome, these masks look small, black, and lame i thitnk --The preceding unsigned comment was added by User:24.63.6.47 .

I think last years were a bit cheesy looking. I think these will look great on my necros. :) - BeX

I dont think so. If you finish the 4 quests that Imperial Guard Hanso gives, you get 240 Victory Tokens. If you need 250 for each mask, to get 5 different masks you need 1250 tokens... Thats lots of tokens imo. :P

What are you talking about? O.o -- Helena

I think that anon was telling us to take this discussion to a forum because this is "wikipedia". I guess they got lost somewhere. - BeX

Opinions are allowed on talk pages. NPOV is for articles. - BeX

I agree that opinions should be allowed on talk pages, but my opinion is, saying that the demon masks look lame is not contributing to anything. Besides, I loved it as soon as I saw the side view. Awesome! Alaris 14:15, 13 July 2007 (UTC)

It seems that the Dragon Festival 2008's mask will have the same name as this one. I can suppose it if I take a look at the picture's name on the official announcement page (demon_mask_2008.jpg) (the 2007 one was named demonmask.jpg...).
So, I'm not 100% sure, but I think this page should be renamed. However, it may be wise to wait for the emperor to give the mask (and to know its real name) before doing any changes...