I went to kill this boss shortly after reading about the update and chose to lure him out in order to prevent the ambush or at least not aggro them if they showed up. I don't know how it normally happens, but I lured him out by about an aggro-bubble radius from his normal position and nobody spawned to attack me. Furthermore, once he was killed, I charged in expecting the ambush, but nothing happened. It would seem that you can prevent the ambush entirely. --Knux 17:43, 16 April 2010 (UTC)

i got them to spawn for me after i killed him, must of did it wrong--BobbyT

Did what you did, lured him out then took him out, except when my heroes aggroed a spirit and went to kill it where he was originaly standing, they spawned. Lord Zepherr

I noticed this as well. It seems if you kill him without running up to him directly (IE, melee range) the additional Peacekeepers won't spawn, even if you run up to loot his corpse. If he IS alive when you run up to him though, 6-8 Peacekeeper Marksmen/Silents will proceed at wrecking your backline. Also, please be sure to sign your comments with "~~~~". --- Ness Hrin 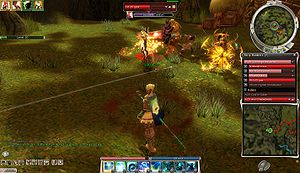 I went to fight him for the bounty, and ran into a weird glitch. He spawned in the usual place, usual enemies... but Vakar was just named "Lynx". He had the right model and moves, just the wrong name. Weird, huh? Leon Drakenhart 03:12, 23 April 2011 (UTC)

This is a glitch that can be found nearly everywhere, where sometimes NPC names are replaced with animal/pet names.–