If there is a dispute about this page please follow the standard deletion process, including stating the reason on the talk page and not attempting to blank the page yourself.

Not that I'm insinuating anything, but if the standard deletion process is to be followed, why did you remove the delete-tag on the page without discussing it as it clearly states in the tag itself? — Galil

Because the page was blanked in the process of adding the tag. I simply rolled back the entire edit, if the person who added the tag wishes to follow the deletion process they are more than welcome to add the tag without blanking the page (or anyone else).

Ah, so it seems. I must've missed that while scanning the history. Sorry if it sounded as if I was actually insinuating something, but it's hard to avoid when you ask someone about things that don't quite work out in your own head. — Galil

The person who made the page blanked it after a few moments, so I put it up for deletion. He then later put back content. Sorry for the confusion. I still don't believe that the item exists, however, and the user's previous edits doesn't seem support otherwise.-- Almighty Cow 04:12, 11 January 2008 (UTC)

Gonna say undispute this. Can say pretty confidently that this ONLY drops from champ strongboxes.--TahiriVeila 02:55, 9 June 2011 (UTC)

I'm providing screens in a minute[edit]

Ok, thanks again to Ty The Violator for it: 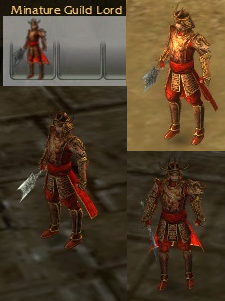 As with the miniature ghostly priest, please someone with knowledge edit it correctly. As a side note, both miniatures are named on english when I'm playing with the game in spanish, so I think it's some sort of bug. Lokheit 15:34, 5 June 2011 (UTC)

That's not the only bug. The English spelling is wrong too judging from your screenshots --Manassas