OK looks like there's a light blue ring (like a super enchantment). Currently it seems like there can be more than one boss- I've had Ogden and Zhed both be boss at the same time. 14.192.236.4 06:39, 1 September 2012 (UTC)
(Edit conflict) There's a big blue ring around the torso of the player character that has this effect on them, which is somewhat similar to the visual effect that appears when a character is enchanted. --Silver Edge 06:42, 1 September 2012 (UTC)

it was added that a character shouts im the boss to the main page, the text does indeed come up above the persons head in the same way shouts do. so take this as confirmation. rather than removing such post and saying prove it does, why not go ingame and see for yourself :) Spark-TBa 16:52, 8 September 2012 (UTC)

I have been playing JQ and becoming the Boss, but never saw it.

here is your proof, this was with 1v1 in gh scrim so to garauntee getting the boss, ill let you change it back if you want. sorry not sure about how to post a smaller image. 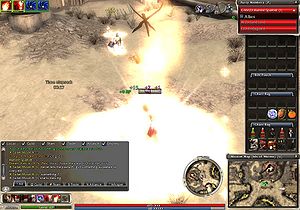 a guild member of mine just told me that henchmen in gvg dont lose the boss aura/effect once they have it, even after death and that in a practice run with some other guild mebers she had 3 henchmen all with boss on at once, is there anyone else that has had/noticed this effect. Spark-TBa 19:09, 9 September 2012 (UTC)

here it is, i appologise for size again, i tried toget it to the same size as last one was changed to but it wouldnt work. 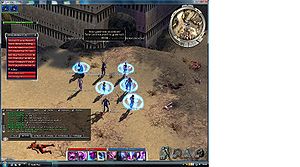 is there anyway to tell if the effect on henchmen is just a visual leftover or if they do definately keep the buffs?Spark-TBa 22:12, 10 September 2012 (UTC)

Twice while playing a 55 monk, I've noticed that sometimes when taking damage (but not dying,) the person who did damage to me will also visibly gain this effect (whether they actually gain the effect or if it's just the animation, I can't confirm.) I also can't confirm whether it's caused by Protective Spirit or RoD and Judge's Intervention. Needs more testing C4K3