there are 2 versions of the wedding dress, one undyeable and one dyeable. The undyable dress is "Traditional Wedding Finery" and the other is "Wedding Finery"

There is a difference for the assassin with the traditional and normal wedding finery: instead of a normal garter she has a small dagger hidden on her inner thigh. I noticed it when I had my character dancing. --Marc Reler 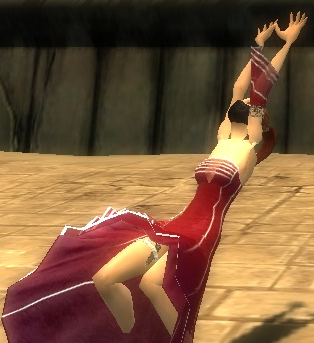 Nice, Gwen is a backstabbing female dog, Oh, an i like that position. --Neil •

I took tons of screenshots, you can't see it very often. I wonder if it exists on any other professions or just assassins.--

Trying monk, don't they do flips and stuff?--

Dear Anet, I know female dresses are the ones where you can verse more creativity into. After all the women are the eye catchers at festive events; elegance, splendour,...

But what about us men? All the sets have basically the same black tuxedo... If you would please implement at least a white one, get us out of the boring old routine, that'd be cool.

You can always dye it white (or any other color).. -- Cyan

Actually the tuxedo's not even black, they're red. The wedding one is slightly different, hat is taller too. Oops. Two versions one red, one black but only for the wedding tux, others just red. Ramei Arashi 07:14, 20 November 2010 (UTC)

Maybe the cufflinks are different? ;)

Ok, what did they do with the resolution of the dress. Its looking worse then yesterday =( -- Cyan

Colorable, the upper part look worse then yesterday, the resolution of the texture seems lower, specially the white lines. -- Cyan

I wish I had a screenshot from yesterday, because I can't tell the difference. I dye my dress in warm colours to avoid the red pixels glaring from under the cold ones, would be helpful to get a screen similar to this one, but from the day of content release to compare: http://i54.tinypic.com/2zzuiq8.jpg --Goniek Talk 12:05, 20 November 2010 (UTC)

I have only screens from a distance, where it is hard to see. =/ -- Cyan

why isn't this availlable at the online store atm?[edit]