Hey, it's your talk page! Welcome to the Wiki! If you ever need help, feel free to contact me or any other of the members of the Helper Program. Happy editing! :D — Why

Thanks... been editing for a little while at least, just getting my signature / user page / etc in order <_<. -- Chrono (talk)

Your sig looks rather awesome, I think. Glad to have you with us :) — Why

Thanks :O, I think that everyone should play Chrono Trigger at least once <_< -- Chrono (talk)

The policy/guidelines says to use the "U map" for maps. —

Yeah I know, but I find the outpost markers so much easier to navigate by... I guess I'll try and merge the two maps together so I get the city markers and the res shrines/collectors,etc... -- Chrono (talk)

You could just type in the name of the outpost that is there. —

Thanks, plan on doing so... though I've run out of easy bundle items (those were my favorite >_>) -- Chrono (talk)

I have two places that I use to take screenshots:
1. The Floodplain of Mahnkelon right outside Moddock Crevice. There is a ramp with some transparent areas that works alright.
2. The bridge directly east from the Gate of Fear exit into Domain of Pain (the lighting is kind of weird).
You can also /sit to get closer to the item. After that I cut them out of the screenshot with photoshop... -- Chrono (talk) 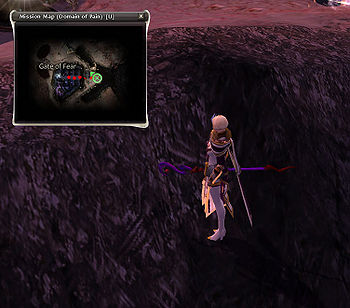 Just exit from the Gate of Fear and go east in Domain of Pain. It's perfect for taking pictures. -- Chrono (talk)

Hiya, first off just like to say nice job on the item pictures. One thing that I would like to ask though, is when adding them to the page could you please add the direct link (name) instead of {{PAGENAME}} template? This just reduces the number of templates on the pages. Simply adding a "subst:" (so {{subst:PAGENAME}}) in front of the template will also work. Thanks. ~Celestia 01:16, 1 April 2010 (UTC)

Thanks... and thanks for renaming them... the reason I started out with FILENAME render.jpg is because that's what is in the item infobox template. About halfway down in a comment: ; render: The render image of the item. Setting render=default will set the image link to ([[Image:{{PAGENAME}} render.jpg|100px]]). Omit if the render is not available, or will not be used.. -- Chrono (talk)

Hey there, I would like to know what font you are using for Start and End in File:Courier Falken Watchtower Coast map.jpg –

not sure if you know or care but I made some updated "stars" for maps. the one lord biro made points downward, these are centered a more vivid, kinda like in game. :

It's a good thing that you uploaded that new version Nick the Traveler's location, because it was only the exact same as the previous one. --

I like making them look nice... you were using texmod and you cut off the "L" in Longeye's :P -- Chrono (talk)

Haha, you're welcome... hadn't done any recent changes to the wiki and the boss was easy enough to farm... So now I have a shiny new Wandalz's Refuge woo. -- Chrono (talk)