Existence is fucking awesome and so are a various selection of you people here too! This talk page is now about dissing religion and republicans/conservatives. And fun! Always fun.

Also; ""As you move closer to manhood, this little factory will sometimes produce an oversupply of this substance. The Lord has provided a way for that to be released. It will happen without any help or without any resistance from you. Perhaps, one night you will have a dream. In the course of it the release valve that controls the factory will open and release all that is excess.""

Healthy Mormon advise on your everyday habits related to the last section in my latest archive. Discuss, and laugh!

Man, if this was true I would be pouring rivers every night. :> --Unending ♥ fear

"For the most part, unless you tamper with it, you will hardly be aware that it is working at all."
"Do not be guilty of tampering or playing with this sacred power of creation. Keep it in reserve for the time when it can be righteously employed."
Artist rendering. Also, wow....just wow. Karate 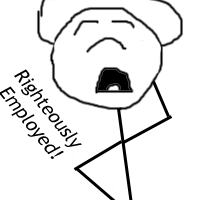 Do not make fun of religious beliefs. It is inappropriate. Have a nice day.

"if a religious belief stares at a cold-hard fact and is retarded, then I think it's safe to make fun of that specific belief"
KJ just justified all forms of blasphemy! Check out the last section in my latest archive, I was quite seriously guilt tripped back in my Mormon days! --DANDY ^_^ -- 19:10, 30 August 2010 (UTC)

Don't call me a troll Jon :<! Just because Chaos has some issues with his religionsexual life is overall awesome, don't gotta be jealous :<

My bad, iffy. I thought it was someone else <3 Karate

Yo hey those times are past! ^___^ Dandy so totally not religion-problem-thing anymoree! I wouldn't mind if my parents saw the light, though, the amount of money they pay in tighting (10%) is ridiculous. And they'd save time and alala what else. Beyond the faint hope of getting to live a teenagers life ;p --DANDY ^_^ -- 11:00, 31 August 2010 (UTC)

But tithing has always been a confusing term for Judeo-Christians (I'm including Mormons in that for the time being). Tithe, like Mis said, is by definition a 10th. However, the only biblical example of a 10th being given is when Abraham gave a 10th to Melchizedek, who later came to symbolize Christ in the early church. Every other example of giving to a church-like body in the Bible included giving anywhere from 3% to everything a person owned - most often the latter.
By the way, if I recall correctly, Mormon institutions typically require a 10% tithe. I think they're allowed to give more if they see fit, but the 10% is a requirement as part of their sanctification. Karate

In the same vein Zakāt, the Muslim pillar of alms-giving, is a set 2.5% of one's annual income.

But most Muslims give more. In Pakistan, they are required to give both Zakat and Ushr, which is like 7.5% of their total income when combined. Karate

Ye you pay brutto/netto depending on your "conscience", and then once a month you fast a sunday and can give the money you save doing that for charity purposes. Funny shit how the millions they get from tithings afaik aren't supposed to go to charity! I feel funny for today getting an "Ahaa!"-experience about the full irrationality of religious beliefs. --DANDY ^_^ -- 18:26, 31 August 2010 (UTC)

This is a section. — Raine Valen

Dandybot accompanied by a silly musical tune has been stuck in my head for weeks. @.@ --Unending ♥ fear

05:03, 1 September 2010 (UTC)
Life of Dandy v.XYZ - More Interesting Turns. <3 Dandybot is eating rice crispies while secretly raging at "masochistic" emokids :> When not thinking about that, I'm thinking about how hilarious some various girls with their flirting are. I feel shallow, maybe I am! I also totally want the emokid's cute girl :< --DANDY ^_^ -- 06:36, 1 September 2010 (UTC)

You can have her. Challenge him to a joust, with horses and stuff! And put it on yootoob so I can see! — Raine Valen

Ye but I also totally want this other cute girl and this third cute girl! I'm in the middle of evaluating! This cute redhead seems like the most valid pick, though, but I can't decide! FUCK THIS I'M GOING POLYGAMOUS. --DANDY ^_^ -- 18:39, 1 September 2010 (UTC)

My advice in that is to make all involved parties aware of this at the outset. This will probably save your life. — Raine Valen

I actually find it's best to keep them completely in the dark about each other. I've strung girls on for over a year before.

Well I don't know about dating there. I tend to think of dating as a pre-relationship phase where you can see as many people as you want.

Personally I find dating to be the worst form of meeting people ever. It feels semi-formal which is a terrible way of forming a contact with new people, and there's always the pressure of being interesting/interested. I prefer casual hanging out, say a "oi let's go to subway" and then you just see if things work out your way. Fine restaurants work if you make it seem like a funny idea, but the point is for things to seem like regular friendship to some point. Dandy's dating tips, and 3 girls + fanbois is obvious proof! ;3 --DANDY ^_^ -- 08:57, 2 September 2010 (UTC)

Auron, that's much better than the alternative where they don't know and turn out to be homicidal upon finding out years later. — Raine Valen

Shadow, this is the part where we make up metaphors. For example:
Life is like a penis. Sometimes it's hard, and sometimes things get hairy, but in the end we all just hope to come out on top. Karate

I wanna take life for a ride then. D: --Unending ♥ fear

The point was actually to not make any metaphor, for some abstract and unexpected humour value. Some of those are pretty amazing though! --DANDY ^_^ -- 19:03, 3 September 2010 (UTC)

Life is like a penis: Just fuck it. |Cynn's Thong|

You guys are troubled. ~Shard

They shall be referred to as such from this point forth. — Raine Valen

The rules are simple, because they are non-existent. The questions will likely be unfair and impossible, or alternatively very obvious, as will the rewards be, provided that I bother with any. With the rules being what they are, I am likely to reward the justification rather than the correct answer. The questions will be kept up for a day or two or until I get bored with them. --DANDY ^_^ -- 15:16, 5 September 2010 (UTC)

Question #1: Which way does Dandy swing?

(talk)« ]← 00:42, 8 September 2010 (UTC)
I'm an omnisexual bisexual who meatspins in a circular motion clockwise north of the equator in front of fellow reindeer. That sounds about right. Jacob (UF) wins for quoting my own words, though, which is a rather strong reasoning, provided that I wasn't lying. You will never know!
I'll mail you the reward sometime when I have time, I'm @ school atm and have v little time at home. --DANDY ^_^ -- 08:06, 8 September 2010 (UTC)

Had you said that a little earlier you would totally have won. Even now I considered telling Jacob that there had been a terrible, terrible error in awarding the prize. '
Oh, and I got my lol of the day. Winning reference! --DANDY ^_^ -- 13:43, 16 September 2010 (UTC)

Question #2: What flavor is the candy I'm eating right now?

13:46, 8 September 2010 (UTC)
He's Finnish, thus FINISH HIM. This is a logical conclusion because the words are homophones, and you are a homosexual.

He's Finnish, thus shit flavored. That's all Finland is all about, crapping in people's mouths. →[ »Halogod

(talk)« ]← 20:35, 8 September 2010 (UTC)
He's Finnish thus it's "salty" liquorish flavored candy since that is the closest to a legitimate shit tasting and shit colored candy. --Lania

Holy shit, that's correct :p and also the only answer I could consider ^__^ In fact it's tar-flavored salmiakki (=salt liquorish). Terva Leijona sounds creepy then steals your woman with its awesomeness.
Oh and if Jacob wants to have some of my semen candy I really won't mind sharing. --DANDY ^_^ -- 07:47, 16 September 2010 (UTC)

Question #3: List as many objects as possible from my desk

Various half empty cans of various liquids, some of which may not necessarily be safe to drink. ShadowRunner 20:00, 16 September 2010 (UTC)
Your girlfriend. — Raine Valen

neshot. 20:18, 16 Sep 2010 (UTC)
Stuff. - Mini Me 21:02, 16 September, 2010 (UTC)
Various crap; if your desk is anything like mine, you have a computer and accessories, a landline phone you never use, a "do these things" paper or two, receipts you can't get rid of because there's still 42 days left to return the computer accessories for store credit (and get something better!), lens cleaner, notes for stuff you should be reading for work, gum, post-its, and not a single fucking pen. -- Armond Warblade

Question #4: What the shit?

If you don't want to die, don't have sex. Simple cause and effect.

If people are offended by those names, fuck them. :| (not literally :3) --Unending

I am offended that you are impling that people have unprotected sex with multiple partners....that play GW!----Xtreme 10:10, 21 September 2010 (UTC)