Needed a new start to my talk page. Hopefully I didnt break any rules by changing this. It is MY page. --'ÑöẊĭƑý

Actually... yes, GWW:USER, but is easy to fix if you do what HELP:ARCHIVE says :).--Fighterdoken 22:45, 11 May 2008 (UTC)
(Edit conflict) I've archived the comments for you, as per Guild Wars Wiki:User pages. Please leave the link on this page, and archive in future. --

It's sexy, don't ya think. My monk is now beast.--'ÑöẊĭƑý

Your userpage is in violation of User page policy. Maximum size for user mainpage is 300k, yours is 500+. You may want to reupload a smaller version of the very large picture, or just remove it all together.--

Rather than harrassing other users why don't you do something productive and fix your own page?--

tbh, i dont really want to fix it. it looks nice. if you want to do it for me, thats great. but besides that please dont accuse me for harassing others as i am not. --'ÑöẊĭƑý

While this is dealth with you may want to: Stop reverting (you can do it later anyways regardless of how much it is vandalized), stop discussing (that only gives another reason to keep going), and reupload the image within the 150kb recomended size :).--Fighterdoken 00:06, 14 May 2008 (UTC)

kk, hope this can be fixed by tommo. thx a billion --'ÑöẊĭƑý

lawl for srs, this person seems to be very childish.

exactly drago. very childish, and he probaly has to much spare time as he keeps reverting the reverts and giving me a whole new main page.--'ÑöẊĭƑý

How's that trolling? I simply posted that the user is annoying and needs a ban. I didn't just randomly intervene and say something. I made a whole new category (and at that time, I didn't know about the admin noticeboard, where I should've reported the issue)--'ÑöẊĭƑý

it's trolling and trying to rationalise doesnt change that. -- Salome

how is this 'trolling' though. I did not understand issues should be brought to the admin noticeboard. I have a better solution though. lets just drop this whole thing and say... screw it. :) --'ÑöẊĭƑý

Uhm... WTF?, most of those discussion are still fresh and going on. What u archive it for? ~ Kurd

Way too damn long. And way over the recomandations. --'ÑöẊĭƑý

You should not be archiving ongoing discussions.--

i couldnt see the ongoing discussions because of the page length. if someone wants to find the exace posts that were being discussed, be my guest. -_-.--'ÑöẊĭƑý

There were several of those discussions that had entries as late as yesterday, imo that would qualify as an ongoing discussion. Isn't a week the standard cut off?--

I think "you made the mess, you should clean it up" is more appropriate than "if someone wants to find the exace posts that were being discussed, be my guest" --

well im too busy to do that myself. if u want to unarchive the whole thing and make it look fugly, have fun. ;).--'ÑöẊĭƑý

If you can't archive properly, you shouldn't archive.--

Next time: if you know you're not going to spend time on it. Don't do it. ~ Kurd

Then archive it properly, if you wish.

How incredibly IMBA I am.[edit] 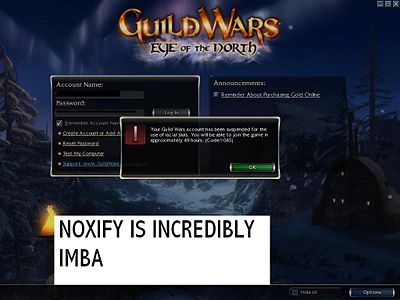 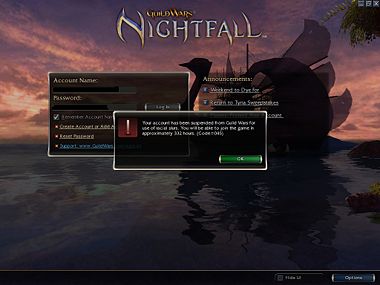 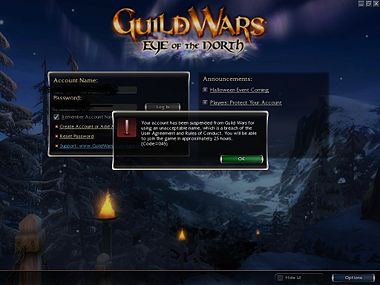 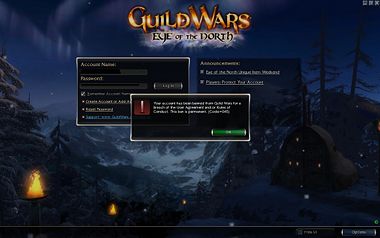 Okay majorly big pics, can you not make those pics a tad on the smaller side? Also how did you go from a perma ban to a 332 hour ban to a 49 hour ban at the mo, seems odd. And also racism = bad. -- Salome

perma-ban = my second account for scamming. 400hour racial ban is from before /report when i used a certain word that starts with N and ends with an R many, many, many times. The 49 hour ban is my currentt ban.

I reduced your pic size so that your talk page is still viewable in a normal manner. In relation to the pics, do you not think that it might be an idea to crop the images so only the wee info box is showing rather than the whole background? As the whole background isnt really needed to get your point across and it would reduce the loading times on your page. Also stop getting banned! bad noxify, bad! -- Salome

i had them like that but people called them fakes. =(--'ÑöẊĭƑý

why care what people think of you? If they don't believe you, screw em. -- Salome

How do I make a term entered in search redirect to a page. For example, if you type Izzy, it redirects to Isiah Cartwrigts page. Whats the code and where do i add it as i would like to add some to some pages.

You add #redirect [[page to redirect to]]. It should be the first thing on the page, nothing before it. - anja