From Guild Wars Wiki
< User talk:Zemmy
Jump to: navigation, search
Hello Zemmy, and welcome to the Guild Wars Official Wiki! Here are a few links to help you get involved. Please feel free to contact me if you need help with anything on my talk page.

Don't be afraid to edit - anyone can edit almost any page and we encourage you to be bold! Find something that can be improved, whether content, grammar or formatting, and make it better.

Hello Zemmy. I see that you are having fun uploading picture for weapons, which is perfectly fine, except for the fact that the black armor background makes it hard to see the weapon. Could you possibly use a different color armor set or take weapon SSs in the Shiverpeaks (white and bright)? Thanks for helping the community by completing the weapon pictures. --User:AlbinobirdAlbinobird 23:18, 2 April 2007 (EDT)

I took Scourge's idea, and finally replaced the picture. Coulda done it sooner but I forgot which character I had left it on.--Zemmy 12:25, 6 April 2007 (EDT)
Replying from my talk page: Not all of the images are dark, some though are hard to see, such as this: 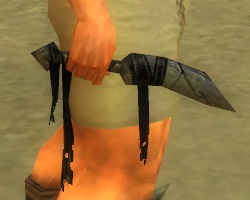 It would be much easier to see if you took the picture in a snowy area, if you have access to Prophecies. That is what I mean. Just so you know, you should sign your comments with --~~~~. --User:AlbinobirdAlbinobird 00:36, 3 April 2007 (EDT)

Try the isle of the nameless, it has good natural light -- Scourge

When I meant Isle of the Nameless I forgot to include the map that BeXoR made: here, it has a nice background and is pretty much uniform in colour. -- Scourge

Hi, I noticed you created some new weapon articles. You put "commonsalvage = Unknown | raresalvage = Unknown" into the articles... I want to let you know that you can omit that parameters if you don't know them - they default to "Not specified". - MSorglos 02:37, 3 April 2007 (EDT)

Another note from me: Category:Contains dust is for items that contain glittering dust. To tag items containing dust use [[Pile of Glittering Dust|Piles of Glittering Dust]]. Happy editing. - MSorglos 16:32, 5 April 2007 (EDT)

And still another note: the categories for salvage info are shorthand lowercase singular, e.g. Category:Contains iron or Category:Contains steel. Most common and rare material "Contains <xy>"-categories exists, so if you see a red category think about it ;). Happy further editing. - MSorglos 14:12, 9 April 2007 (EDT)

Your signature is currently in breach of GWW:SIGN. # Signatures must clearly show the full user name of the user. - BeXoR 22:39, 3 April 2007 (EDT)

It's still in violation of the policy, it should be "Zemmy". -- Scourge

You used it once somewhere that I was watching and I couldnt figure out where you'd left the comment because the names were different between the edit and the page. ;P - BeXoR 23:23, 3 April 2007 (EDT)

ehh, i forgot to put in {{user image}}. is there a way i can still put it in? any other part of the page i should focus on?

You should also read about the size limitations. At the moment your images exceed 100kb. It's usually suggested to put that kind of content on a subpage and link to it from the front page with a bit of a teaser. - BeXoR 23:21, 4 April 2007 (EDT)

Yeah, it means total 100kb. Some people are trying to get it made higher, but for the time being, we have to follow that policy. Most people put their character information on a subpage, for example User:Zemmy/Characters. Then it might be a good idea to have one featured character per month and a bit of a description to give them an idea of whats on the subpage. - BeXoR 00:37, 5 April 2007 (EDT)

Oh, i just read that part. I don't know how I missed it the first few times I read it...even when it's italicized. alright, editing now. *strokes chin* I wonder what I should change the template to.--Zemmy 14:45, 5 April 2007 (EDT)

Hey, thanks. I wanted to replace it, but I had no idea how to delete it. haha. there are more that I uploaded that really should have been deleted... like of my other characters, but I totally forgot what I uploaded it as. *strokes chin* I know they are of my characters. anyway, I'll be sure to put the username image name when I upload the new version.--Zemmy 14:58, 11 April 2007 (EDT)

I got the rest of the pages, so no need to worry about those anymore. :)

haha, yeah. I noticed it after my like.. i don't know. 40th one that those links already existed, and that it was red because I unnecessarily capitalized some of the words. Thanks for helping to change them. if there are anymore armor pages that are still red, ill look out for the wordings next time. I didn't change the individual armor links's wording though. =X --Zemmy 12:20, 6 April 2007 (EDT)