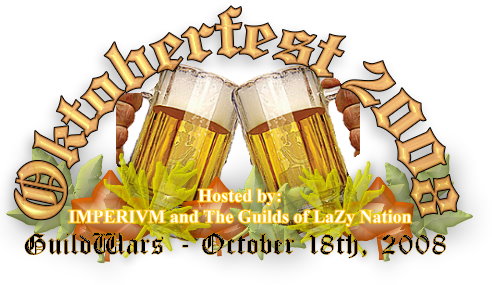 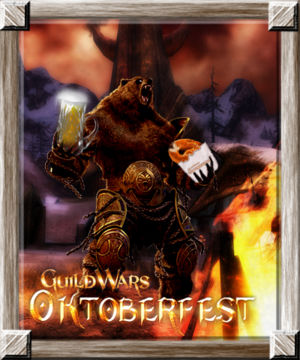 Oktoberfest 2008 is an anual event which was originally conceived by Lord Sojar and hosted by The Guilds of [LaZy] Nation.

Catered by: The Guilds of [LaZy] Nation and generous donations by the Guild Wars community.

Autumn: the year breathes dully towards its death, beside its dying sacrificial fire; the dim world's middle-age of vain desire is strangely troubled, waiting for the breath that speaks the winter's welcome malison to fix it in the unremembering sleep: the silent woods brood o'er an anxious deep, and in the faded sorrow of the sun, I see my dreams' dead colours, one by one, forth-conjur'd from their smouldering palaces, fade slowly with the sigh of the passing year. They wander not nor wring their hands nor weep, discrown'd belated dreams! but in the drear and lingering world we sit among the trees and bow our heads as they, with frozen mouth, looking, in ashen reverie, towards the clear sad splendour of the winter of the far south. 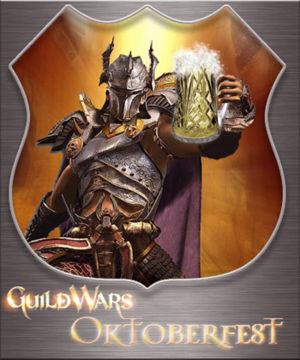 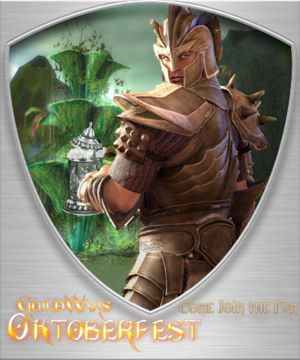 The rules for Oktoberfest were as followed:

2). Use public chat for open discussion, but reserve trade chat for staff members of the event. I have no way of controlling this, but the event will be much more fun if you just keep trade chat for myself and my staff. It makes the event run much smoother, and things will get done faster, resulting in more prizes being given out.

3). Don’t hassle staff for answers to questions. I cannot stress this enough. Most of the staff don’t know the answers, and those that do know are not about to give out the information. Play fair and earn your prize just like everyone else will hopefully be doing.

4). Get drunk and stay drunk. Oktoberfest is all about fall, falling down that is. It is a giant drinking festival, known for great beer, great food, and fun times.

5). Have fun and create a positive, fun environment for those around you. If you come to the event in a bad mood, you will only brings others down. Cheer up, have some fun with myself and the staff, and show the community how to party. :)

These will come in 3 different categories:

The top 10 contestants will win prize packages. The theme for this contest is HALLOWEEN. You needed to come up with a fun, unique costume using what armor/armors you have currently. Holiday helms were welcomed. Colors should be oriented towards that of Halloween, and you needed to describe to the judges the inspiration and meaning of your outfit. Scores were out of 60 points, 15 points per category.

Categories were as followed:

To Enter the costume contest you needed to take a screen shot of your character and submit it along with your IGN to an e-mail address given where it was judged by the judges. Winners were contacted via both e-mail AND In Game and prizes were distributed once contact has been made.

As with all of my previous events, we had the Scavenger Hunt. This Scavenger Hunt was different from any that you may have previously been in. It did not rely on having a fast internet connection, any farming, or an amazing PC to quickly load zones. Rather, we required you to use your brains to solve a complex riddle based on the Guild Wars lore.

A rather simple, but highly effective contest. A specific title track will be called for. The highest ranked individual received a random prize. In the case of a tie, a Rock, Paper, Scissors showdown will be held.

While the title of this event may come across sounding like some kind of Polymock or Pokemon contest, I assure you it isn’t. This event will be group based. You will need to form into groups of 8 people. A theme will be given, and each group of 8 must form into a design relating to that theme. [EXAMPLE: Valentine’s Day, your group forms a dancing heart] Each District Head will then judge each formation, awarding the winning formation group a prize. Each member of the group will receive the same prize.

Same concept of the solitary mission where someone does emotes and the others mimic them. 10 emotes with multiple winners doing a round of rock, paper, scissors to decide the winner. Groups will have to be limited to 10-12 people. Run 2 groups at once. Have the participants shut of the emote tab. Details to follow

Here is a list of the all the items that we are accepting as donations Oktoberfest.
If you have anything you would like to donate, please contact Divine Chaoss or Slayer Of Nemesis in game.