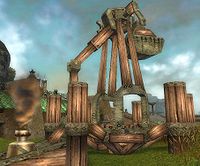 Siege weapons are self-propelled or stationary weapon system-platforms, usually artillery-based, designed to create environment effects and/or bypass terrain restrictions while dealing a great amount of AoE damage to structures and/or creatures; usually at a fixed range. Siege machines of different kinds can be found in several places of Tyria, often being used as a way to either defend or penetrate a fortified position, impede the movement of troops, or knock down doors and gates in addition to attacking enemies. Players should be cautious when using siege machines, as some of them can deal friendly fire.