This skill should cause cracked armour also. Plus, is the self knockdown effected by the stonefist insignia? Halogod35 22:37, 17 April 2008 (UTC)

They should change the functionality to "if this attack is blocked, target foe is knocked down. If this attack misses, you are knocked down." Really, swinging your hammer so hard you knock yourself down on a miss would make more sense than falling down if you make contact. I'm not sure it's entirely possible, I mean, how the block and miss/fail are coded, but it would be a much better skill if it was changed to make physical sense.... FleshAndFaith 23:39, 30 April 2008 (UTC)

The reason this skill is like the way it is, it was originally designed if it was EVADED you'd like miss and fall over. This skill did nothing on block. But when evade mechanic was removed, all evades were replaced with block. So that's why this skill has the stupidest thing on it. -- Halogod35

I like that they removed 'Evade', but I still maintain that this should be reworked to be a lot cooler and physically sound. It would be very easy to rework too. Keep everything the same except, "If this attack is blocked, your target is knocked down. If this attack results in a miss, you are knocked down." The only problem is, Is a Block considered a Miss by game mechanics? FleshAndFaith 01:05, 24 October 2009 (UTC)

Um, it's also called won't fucking work. Balthazar's Pendulum has always countered KD from foes. Not from your own skills. Ritual

no, really, it's just not to use this skill when the target is under friggin Guardian or Lightning Reflexes.. This is quite cheap damage tho. Also, getting blocked counts as missing as far as I know. Blocking should trigger Price of Failure. --88.195.117.221 09:34, 25 October 2008 (UTC)

Dont discount its low adren cost, and its easy lead into Heavy Blow. And the damage! So you get knocked down if it's blocked, so what? I can almost guarantee that sin isnt smart enough to jump into his chain from that. 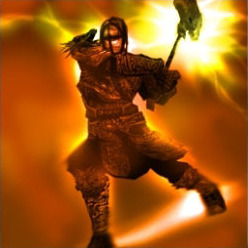 Also should it be mentioned that it has excellent synergy with "Dodge This!"--File:User Chieftain Alex Chieftain Signature.pngChieftain Alex 16:37, 14 February 2010 (UTC)

Why "Dodge This!" won't work[edit]

Simply put, it's an adrenaline skill that affects the next attack. So you use Dodge This, but then you have to attack again to build up the adrenaline for Forceful Blow. However, DT affects that attack instead of Forceful.

Well I guess I'm the first one to say this[edit]