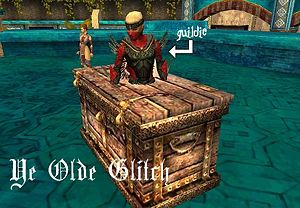 There seems to be a bug on this guild hall. Sometimes, when my guildies and I enter the hall, we spawn inside the Xunlai chest. There's a picture (right) to show what I'm talking about. az :D 21:17, 8 May 2008 (UTC)

Happens to me, and it's quite funny when someone goes to use it while we're /sit(ting) in it and do a /jump when they get close. --

I have been playing Byob GvG, also denominated as Bring Your Own Build GvG. I played on various halls, and I have seen that by far, this is the best Byob GvG hall EVER. I say this because there are 3 doors, making your opponent loose track of where you are, so while you have 2 monks on the base trying to heal the NPC's, you can go and gank your opponents base through the back door :O It was soooo funny how sooo many guilds I faced failed to see us go through the back door O.o

As the page says, its belived that the enemy side is based off of a Kournan Garrison. Personally, I see it as more like the Dzagonur Bastion.--Will Greyhawk 20:49, 6 June 2011 (UTC)