I added a note about this. Why is it removed? Most spirits give an effect even after it gets killed prematurely. The skill description also does not explicitly say that it has to survive the 30 seconds. It says that after it dies, it resurrects. BlazeRick 10:58, 26 March 2008 (UTC)

Right, I'll try out that own spirit destorying stuff. But yesterday I was doing some sealed play, and I had the spirit. It wouldn't res after being killed by an opponent. BlazeRick 11:00, 26 March 2008 (UTC)

More than Gaze of Fury, I'd say Consume Soul. Anyone know if Consume Soul heals resurrected allies or if healing takes effect before? --Eyekwah 10:06, 5 June 2008 (UTC)

Ya. It resurrects all party members within the area with a decent amount of HP and can also bypass Frozen Soil. You can also cast it before you die for your own self resurrection. — ク Eloc 貢 19:38, 23 June 2008 (UTC)

It's been established that if the enemy kills the spirit, you don't get ressurrected, so the only way to use this to ressurrect yourself is if the enemy kills you and spares the spirit. I wouldn't count on that happening. Might be a good tactic in GvG for advanced ressurrection even in the face of Frozen Soil. Other than that, I'd never use this in pve or pvp. It needs a serious buff. --Eyekwah 10:00, 28 June 2008 (UTC)

Strange how a spirit called restoration is not in the Restoration line.Farlong 00:21, 19 September 2008 (UTC)

Restoration is now affected by Frozen Soil. You can't raise the spirit anymore while under the effect of FS. Pudding 05:21, 15 February 2009 (UTC)

Can you still draw spirit or summon spirits from outside FS range? MrPaladin talk 14:28, 17 September 2009 (UTC)

The old one died? ~Shard

Checked back thru history, an IP incorrectly seperated LwN from the comment above about Frozen Soil and Res... I corrected... MrPaladin talk 14:26, 17 September 2009 (UTC)

Ive had the exact same experience in the deep. it ressurects ally (and enemy) summons from stones as well.

Hi. Please place new sections at the bottom of the page. Thank you. — Why

When using feast of souls or spirit to flesh, the healing effect takes place before the allies are resurrected. Necromas 20:03, 22 December 2010 (UTC) 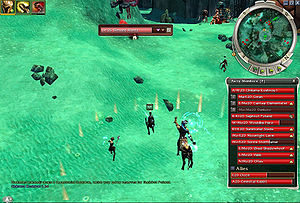 Two summons at the same time

During a The Deep run, I told a ritualist to take Signet of Binding to steal this spirit. A member of the 3-man team I sent to room 1 used a stone which brought an Ooze. It died. A second stone was used and a Celestial Rabbit spawned. When the ritualist player stole Restoration spirit and it died, the Ooze was resurrected and re-joined our party FTW ^_^.