This article should (ideally) also hold information about the spear, lore and such. - anja

Judging from how they carry it around, they can barely pick the damn thing up.--

Why should it be? This is made of bones while the Spear of Destiny was anointed by Christ's blood. Besides, it the Kurzicks that have saints. Paddymew 08:28, 7 June 2009 (UTC)

Does anyone know the damage associated with the spear? When it becomes the supreme spear it does 500 damage, but beyond that, I am not sure. jhgaylor 22:37, 27 July 2009 (UTC)

Actually, when I dropped the spear next to Zhu Hanuku, it dealt 1900 damage, far beyond what I expected. I'm not sure what kind of damage/armor modifiers are responsible, but that's what happened. --RoyHarmon 04:58, 16 November 2009 (UTC)

My derv seems to hold it the other way around =s 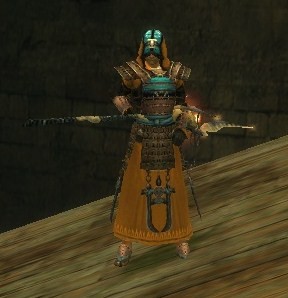 I've noticed that the Spear charges just like it's text says: With things dying near it. This implies Spirits and Minions. But it also implies another thing. To charge it doesn't need to be held. You can just drop it, fight and it'll charge as the fight goes on. The Urn on the other hand, like its text implies, does need to be held to charge. I've tested this, but I'm not really sure what I can show to prove it. But anyone can test this quickly. If you pick up a Spear level 3 or 4 after a fight, don't be surprised. Picking up a Supreme Spear doesn't make the effect icon appear. Sarapico 03:29, 2 May 2011 (UTC)