If anyone were to do the research on this monster for its hard mode level, that would help fill in a blank in this chart. Chaiyo Kaldor talk contribs 17:18, 26 March 2008 (UTC)

Pack Psychic Distraction against him and he doesn't stand a chance.

just because he uses a monster skill ressurect doesnt make him a monk. The aura alone says hes a mesmer. We dont classify Saidra as a monk....pretty sure that she was placed as R/M on the wiki. Maybe this guy should be Me/M and there is a good bet he has high fast casting for ressurect.--Justice 23:18, 14 September 2008 (UTC) 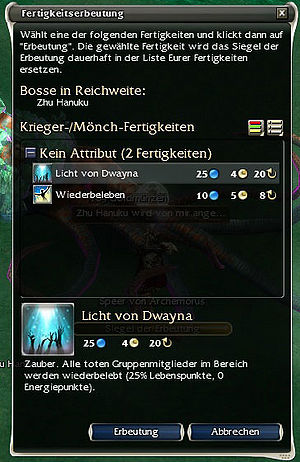 I'm not sure whether he's really a mesmer: his resurrection skill was a normal monk skill when i fighted him with my wammo once...maybe they exchanged the monster resurrection version for the normal one in some update. As the regular version has an activation time of 5 rather than 8, and him being a boss and having double skill activation speed, he possibly doesn't have fast casting. Therefore we should remove the mesmer class from the page again. Frostmaw Spawn also have a necromancer boss aura but use ranger skills and are only classified as such. —Zerpha

Necro and ranger boss both have green auras and it can be hard to tell the difference especialy in a funky lighted area. However it is obvious that this guy has two monk skills. But who is to say that you cant cap skills for a different profession through a boss? U can activate the signet and if the boss doesnt have skills for u it says there arnt any skills for your professions. Something similar in comparison once apon a time in NF you could get more skills for a single profession character before choosing a secondary by talking to hero skill people. My single profession paragon could get other monk skills in this way. But now they killed that with the requirement that u need to have a secondary before talking to hero skill trainers. just some thoughts on how we should categorize this funky dude--Justice 07:03, 23 October 2008 (UTC)