I came here to offer suggestions which might be of some use to the developers as they contemplate what to put into the beta for GW2. I'm sorry if I have a tendency to respond to comments on my ideas, I just want to see if there's any chance some more expanation could bring more people over to my side.

And just so everyone knows: I hate Terra Xin and you should too. If he shortens your article unnecessarily and won't listen to reason, you don't have to take his crap. And even if the edit was necessary, that doesn't mean you can't complain about it. You will have pleased me and potentially delayed him from screwing with yet another person's article;)--Shai Halud 16:56, 8 September 2008 (UTC)

I've also posted some articles and comments on the Guild Wars Feedback Community. It's a good page, but it needs more participants. So please visit and take a look--Shai Halud 18:12, 5 December 2008 (UTC) 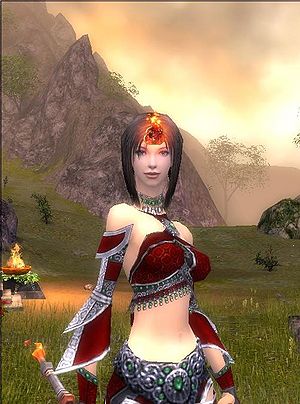 There are others, but I only really keep them around for birthday presents...

Companions and Henchies in the Continuous World

The Distribution of Land

This is an idea I'm quite proud of and spent a great deal of time developing. It probably will never make it into the game, but if you have a lot of time on your hands, I've heard it's a good read. I will also soon be adding in segments to make this idea compatible with Mounts as Companions.

Norn: The Book of Deeds

Sylvari: Seeds of the Dream

Click on the link above to read my ideas for the storyline of GW2. It pretty much assumes you've read The Divine Gambit, World-Changing Events, Tides of War, and Spawning System so you'd better go ahead and read them if you haven't already as this article makes heavy use of them. You'd also best be familiar with guild wars lore before reading it or you may become a bit confused. Also, its incomplete for now, but I intend for it to eventually span four or five continents so I'll be making updates to it before Christmas. Thanks. --Shai Halud 00:12, 4 October 2008 (UTC)

Mounts as Companions and More...[edit]

Here we have an idea which is somewhat derivative of my idea for customizable race specialization. It is both comparable with that idea and I intend for them to overlap heavily. It can however be adapted To be included independent of that system, and that is Why I am posing it here. Expect more details soon to come.

Asura and Sylvari: Golems and Jagganathen

As for Those Who do not Wish to Bring Companions...

This is an amusing idea I've had for the local Asuran plot. It involves the various services the Asura provide and the organization which controls them. I'll post an article for each branch of the TKC here as I write them. Opposing The Triple Krewe Council is the Krewe of Krewes which I will post an article on as well.